Of course, Terry Wallace hasn’t coached Richmond in nine years since he was sacked in 2009 and replaced by the eventual premiership coach in Damien Hardwick.

But a few veteran Tigers who were crucial to Richmond’s ongoing premiership aspirations were drafted under Wallace.

Jack Riewoldt, Shane Edwards, Trent Cotchin and Alex Rance were all drafted during Wallace’s tenure at the Tigers, and the case could be made that they make up Richmond’s best five players, alongside Dustin Martin. 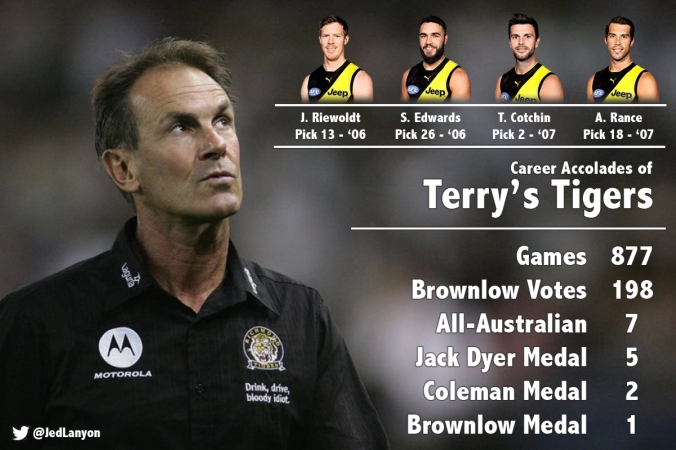 Terry Wallace spoke to Sportdot’s ‘Don’t Argue Podcast’ about his initial impressions regarding the young players he drafted, who are now stars of the Richmond Football Club.

“Of that group, Cotchin was the standout. Clearly, as he was a pick two,” said Wallace.

Carlton infamously passed on the Brownlow Medallist in favour for a ruckman in Mathew Kreuzer.

But Wallace says even if Richmond had the number one pick, he still would have opted for Cotchin over Kreuzer.

“We might have copped a bit of flak because it would have been picking a little bloke over a big bloke, but we clearly thought Cotchin was the standout for that year.

“We had a real handle on Cotchin and thought he was going to be a star of the game.

“I’d seen a fair bit of him along his journey. My son came through the Northern Knights at a very similar time, so I had sort of seen Trent Cotchin play since he was about 15 and just knew how good he was,” Wallace said.

While he was certain about Cotchin’s potential, Wallace was initially unsure of how the other three players would develop as footballers.

“Probably the hit or miss one of that group was Alex Rance.

“A prodigious talent, backed himself in from day one as an under 18 to charge down the ground and be really bold. He was a super athlete but just his understanding and learning of the game was something that he needed to really work on,” Wallace said.

Wallace credits Rance’s development to the Richmond coaching staff after his departure as head coach.

“When Justin Leppitsch arrived at the club, playing a very similar role to him. He had the understanding of what Alex was very good at and what Alex needed to work with, and worked very closely alongside him.”

And while Rance’s work ethic and conditioning was his strength, Wallace believes that it was Riewoldt’s weakness in his early days at the club.

“We really liked his work, but were perhaps a little uncertain about his mobility in his early days. He had a fair bit of puppy fat as a youngster and his work ethic was nowhere near what it is today,” Wallace said.

Riewoldt is now one of the oldest of the current Tigers at just 29. He has had his leadership credentials scrutinised in years past, but was granted vice-captaincy at the beginning of the 2017 season.

“Shane Edwards was the interesting one.

“He was a second-round selection at the time and I never envisioned him to be the uncanny player that he’s become now.

“He had a really strong work ethic, a nice balance between speed and endurance… but his lateral vision and his sharpness in and around the contest (has improved) as he’s matured. He’s really become a standout player,” Wallace said.

Edwards is often underrated in comparison to the other three, perhaps due to their individual achievements, but he played an instrumental role in Richmond’s premiership run.

Edwards’ work around the contest, as Wallace stated played a huge role in the 2017 Grand Final, often creating space and dishing the handpass out for others. While he may go unnoticed to some, he doesn’t in his former coach’s eyes.

Wallace, who was on the voting panel for the Norm Smith Medal, judged Edwards as the second-best on ground, despite none of the other four judges handing a single vote to Edwards. Edwards finished the game ranking first for clearances, inside 50’s and score involvements, highlighting a clear influence on the game.

Wallace jokes that his tumultuous last season at Richmond led to the club being able to draft another superstar and Brownlow Medallist.

“Well that’s the four guys, but I always have a laugh about the other one.

“If I hadn’t have gone through the last 6-12 months at the footy club where I had cameras in my face the whole time and got sacked, well, the club wouldn’t have got Dustin Martin at the end of that season.

“Out of bad sometimes comes some good, and that was certainly the case for the Richmond Footy Club.”

Martin was selected at pick 3 of the 2009 draft after Richmond finished 15th on the ladder. Wallace had departed the club after a 2-9 start to the season.

The 2000’s era at Richmond is typically remembered as one where the club stumbled on particular draft picks. Most notably selecting Richard Tambling at pick four of the 2004 draft, passing up Lance Franklin at pick five. Just months after the hiring of Wallace.

But infamous picks should not override the fact that the club nailed several draft selections at the back end of Wallace’s coaching career and brought in four young men who formed the spine of the team, and became leaders in the next chapter of the Richmond Football Club.