Liverpool’s ‘Fab Four’ has been broken up after the Red’s accepted Barcelona’s offer for the Brazilian star. The A$192 million fee is the second largest fee paid for a player. Barcelona vice-president Jordi Mestre claimed Liverpool slashed their price for Coutinho, which has been poorly received by Liverpool fans, who were assured the club did all they could to keep hold onto the playmaker. The deal has been in the pipework’s since Barcelona sold Neymar to PSG in the summer transfer window. It will be interesting to see how Liverpool invests the money. 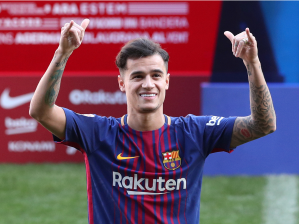 ✍️ Midfielder Ben Pringle has agreed a loan deal with @OfficialOAFC for the remainder of the 2017/18 season.

It’s been a tough time for James Wilson. After recovering from an ACL injury, Wilson has had to shoulder the goal scoring burden for the relegation bound Manchester United under 23 side. Wilson began the season slowly but has recaptured his best form and scored seven goals in his final eight games. The striker will being hoping he can help Sheffield United claw there way back into the automatic promotion places in the Sky Bet Championship. The Blades won only one game in December and now sit sixth on the table.

Coquelin has been much maligned during his time at Arsenal. But in his first press conference after departing Arsenal for Valencia, the defensive midfielder said the only reason he left the club was for the sake of his career. After returning from a loan spell at Charlton in 2014, Coquelin became an integral part of the Gunners midfield, playing his best football when partnered with Santi Cazorla. This season has been a struggle for the Frenchman, who only featured 13 times for the Gunners in all competitions. Coquelin departs after making 160 appearances for the Gunners.

Former Tottenham academy product Alex Pritchard joined Huddersfield Town on a three and a half year deal. The attacking midfielder made nine appearances for Norwich this season, scoring one goal and creating two assist. Huddersfield manager David Wagner said Pritchard is the perfect type of player he likes to work with. “Alex is a young, British player who arrives as one of the top performers in the Sky Bet Championship and with a desire to prove himself in the Premier League.”